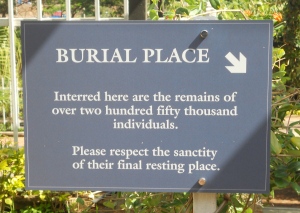 April 7th marks the twenty-year anniversary of the Rwandan Genocide. In a 90 day period, nearly 1 million Rwandans were murdered, mostly those of the Tutsi ethnic group. To put things in perspective, imagine the entire population of Miami and Atlanta obliterated between now and July 4th. Ninety days of complete horror where neighbors killed neighbors, children killed children, and some watched virtually every single person they knew slaughtered before their eyes. Ninety days where the concept of humanity was suspended and all that mattered was the ethnicity printed on a person’s ID card.

Walking down the streets of Kigali today it’s nearly impossible to imagine the carnage these streets saw in 1994. On the surface, Rwanda has healed well. Despite the substantial morbidity and mortality the genocide inflicted on the country, Rwanda ranks above the African regional average in literacy and access to clean water and  sanitation, and has lower levels of child and maternal mortality, as well as HIV prevalence. This is an amazing feat considering the strain that complex humanitarian emergencies like the genocide place on an already crippled economy and government, not to mention the extreme loss of human resources due to mortality and displaced populations. Certainly the influx of a massive amount of aid from a guilt-stricken international community (which did little to intervene in the genocide) has been key in Rwanda’s significant health gains since the genocide. But let’s give credit where credit is due. Rwanda has prioritized healthcare and invested in an inclusive universal health insurance scheme that has made all the difference. The country has become a shining example of how international aid dollars can lead to huge health gains. A nationwide anti-corruption campaign has insured that those dollars are put to their intended use and Rwanda continues to decrease its dependency on foreign aid.

There remains one major shortcoming in Rwanda’s road to recovery. It’s the elephant in the room – mental health. Always neglected, always underfunded, it’s difficult to provide appropriate mental health treatment to many patients in even the wealthiest countries in the world. But if ever there was a country in need of better mental health services, it has to be Rwanda. I have personally only spent a short period of time in Rwanda and was amazed by the resiliency of the genocide survivors. My taxi driver pointed out the lake his parents were drowned in during the genocide. The young physicians I worked with in a rural town described growing up in a refuge camp just over the border in the Congo. The camp is still there and you can see it on the horizon from the hospital where they work. Everyone is relieving the genocide. Everyday. Statistics on prevalence of post-traumatic stress disorder, depression, and suicide rates in Rwanda are hard to come by. Even more difficult is measuring the impact on quality of life and disability such mental health issues can cause. Recently more attention has been placed on mental health in Rwanda with the NGO, Partner’s in Health partnering with the Ministry of Health to ramp up training for more mental health practitioners. Improvement, but still a long way to go.

So on this anniversary, let us remember the victims, pray for the survivors, and celebrate the resiliency of the human spirit. But most importantly let us educate ourselves about genocide that is still going on right now, in more than one corner of the globe. After all, as Edmund Burke put it, “The only thing necessary for the triumph of evil is for good men to do nothing.”